A Contradiction in Broome

I went to Broome over the weekend. It was an interesting place, although not much is open during wet season. What is fascinating is how embedded the town's pearling history, even its contradictions, is in everything you see.

There is a pearling exhibit in Broome's Chinatown called Pearl Luggers. An enormous billboard outside it carries the tagline "The Sea. The Men. The Legend".

Not far, on Conti Foreshore, there is this. 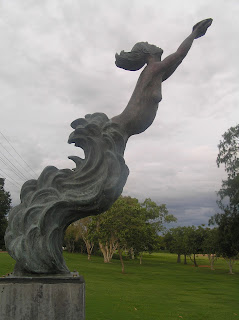 It is a sculpture of a pregnant Aboriginal woman forced to dive for pearls. Indigenous people were often 'blackbirded' or coerced into the dangerous work before the invention of safe diving equipment and even up until the early 20th century. Pregnancy was far from being a factor that would release you from your bond: in fact, with relatively higher blood oxygen levels, pregnant women could theoretically survive longer under water.