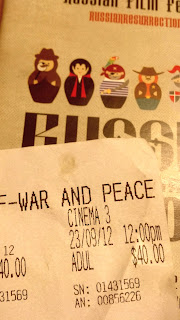 I have just come home from seeing the 1960s Mosfilm War and Peace, all seven or so hours of it, at Cinema Paradiso as part of the Russian Resurrection film festival. I went to see Two Days on Thursday and am planning on Siberia Mon Amour tomorrow, and was going to do a joint blog post of my foray into Russian cinema, but it would be impossible not to dedicate a post to the centrepiece of the festival. The film was made in several parts between 1961 and 1967 partly as a response to King Vidor's 1956 War and Peace. It is an exquisite spectacle, the most expensive Soviet film ever produced (hardly surprising, seeing as it is, in effect, four films).

Read more »
Posted by Sanna at 11:50 PM No comments: Links to this post

So, I graduated yesterday.