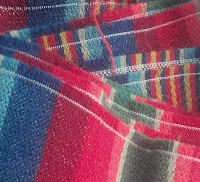 When I graduated my mother wanted to give me something suitably traditional, like Kalevala Koru jewellery, as a present. I thought about it for a little while and decided on Hollola fabric.


I'm from Hollola, and although I can't say I've ever really had a strong sense of regional identity (this is what happens when you grow up in Malaysia, Finland and Australia!), it is my home town. Now, Finland has a number of regional costumes that are referred to as the 'national' dress, kansallispuku. They are an invented tradition in that, while they were based on types of folk dress (kansanpuku) that were in day-to-day use in various parts of Finland in the 18th century, the official outfits were created (codified) much later in the 19th and 20th century as part of the broader national romantic movement that sought to glorify the peasantry and emphasise the distinct culture of the Finns. Although the regional outfits are distinct, they do tend to have similarities, such as striking striped fabrics, aprons, detached pockets and bonnets for the married ladies. (The Sámi gákti has a different style and history again.)


I'd always liked the idea of the national costume, but I think I also knew I'd never actually own one, for a number of reasons. The costumes are intricate and handmade, and as a result rather expensive. Although they are considered appropriate for any dress code in Finland, the sheer cost involved as well as the costumes' distinctiveness from mainstream clothing mean most people are not ready to make the commitment to wearing one.

There is, however, nothing to say you can't use the distinctive fabrics for other, more contemporary designs. Some examples:

While I'm not completely hopeless on a sewing machine, what I wanted was beyond my capabilities as a seamstress. So I got in touch with Isabel Aujoulet, who made my wedding dress many years ago, and asked her to produce a dress/tunic out of the fabric. 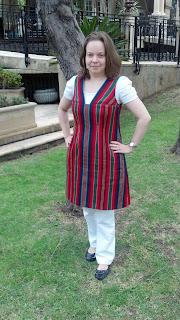 It has secret zipper pockets in the seams and a gloriously soft blue silk lining. It can be worn as a dress, but I prefer the way it looks as a tunic - there's something about the way the white works with the stripes that appeals to me.

So there you go, my 'traditional' costume. The way I see it it's extracting the 'folk dress' out of the 'national dress': turning the kansallispuku into kansanpuku.

I am working on making some smaller bits and pieces out of the material myself, and will report in due course over on Occasional Flourish.