I've had plenty of occasion to think about 'offence', largely because I have been on the internet once or twice. The most recent event to bring me back to the concept is the furore around this year's PROSH magazine. Drunk naked West Australian uni students hit the streets to sell racist hate-speech has got to be in the top 10 of headlines your average Vice-Chancellor would not want to have to deal with.


Now, I have not read said PROSH. The offensive content is detailed in the article, so have a peruse if you fancy. In any case, the specific content is not what I want to talk about. I had a quick glance over the UWA Guild Facebook page for some clues as to what had been going on, and felt that familiar surge of impotent rage I know so well from some of my earlier sojourns chez l'internet. There is always a healthy contingent of people who seem to believe that if something is called 'humour' then you can say whatever you like, and anyone who doesn't double over with a hearty belly laugh just needs to get a life, lighten up or look up 'joke' in the dictionary. To find something offensive - to be offended - is to be emotional, irrational and wrong. You will find a suitable range of jpgs to make this point for you, should anyone pull you up on your hilarious take/realistic views on all manner of topics. 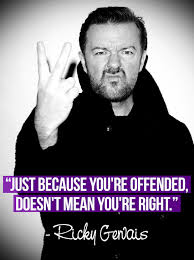 Now, this is all fair enough - to a point. There is a lot that you can achieve with eye-wateringly black humour, a well-timed titty-cunt-bollocks or blistering satire. The thing is, simply calling something satire doesn't mean it actually is that, and as popular as it is to go on about how little one cares about the opinions of others (whilst still bathing on a semi-regular basis and maintaining a social media account), to use that as an excuse to say inappropriate things is intellectually lazy. Ricky Gervais and Stephen Fry are intelligent, innovative communicators and their responses to "offence" come from particular contexts - I would be very, very surprised if they were to genuinely think that anything goes and any ill feeling is simply due to faulty wiring in the recipient of a particular verbal outpouring.

The thing is, you fat fucking cross-eyed inbred oxygen thief, some things are inappropriate, wrong or offensive, and it doesn't take the pearl-clutching of an emotionally unstable interlocutor to make it so. Neither is it wrong or weak to point that out.

It bothers me that criticism is taken to mean an out-of-control emotional response, AND it bothers me that having an emotional response is also considered weak and below par. Yes, there are more and less productive ways to respond to insults, plain idiocy or simply things you disagree with. Yes, there are things out there in the world that will shake your sensibilities here and there, and that is not a bad thing. To find something offensive or unpleasant is not in itself a sign the world should change to fit around your preferences - heck, you might be an old fuddy-duddy, a stick in the mud, an arsehat or just wrong.

But if you choose to go down the path of irreverence and biting social commentary, an ounce of self-awareness goes a long way. Being good at what you do helps. Also, you might want to look up 'satire' in the dictionary.
Posted by Sanna at 10:05 PM